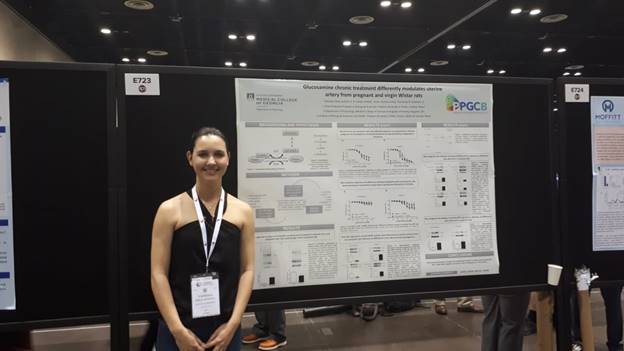 The PhD student Vanessa Dela Justina, guided by Dr. Fernanda Giachini (RIVATREM Brazil - UMFT) was awarded the Robert Gunn Student Travel Award, launched by the American Society of Physiology, in the 2019 edition of Experimental Biology, which took place in Orlando from 4th to 9th of April. This is the largest American congress that exposes the work in the area of Biological Sciences developed worldwide.

At this scientific meeting, more than 50 scientific sections occur simultaneously. There are more than 5000 posters being presented, where representatives from 65 countries actively participate in the scientific discussion.

The researchers are currently working the modulatory mechanisms on uterine artery during pregnancy and investigate a signaling pathway that involves a glycosylation of vascular proteins. The work is part of the student doctoral project, which is a scholarship test with Dr. Clinton Webb's laboratory at Augusta University. The project also has a scholarship from FAPEG and is also funded by CNPq.